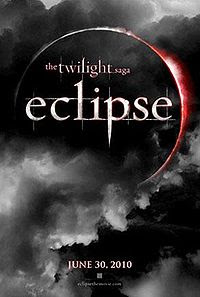 Independent film studio Summit Entertainment has got quite a gem on their hands, and its name is the “Twilight” series.

The first movie quickly became a blockbuster box-office hit in 2008 despite early concerns that the book series’ rabid fan following wouldn’t translate to ticket sales. The second, “New Moon,” has grossed over $481 million worldwide since its premiere on November 20. The third installment of the franchise, “Eclipse,” wrapped up shooting back in October and is slated to release June 2010.

With the enormous success of the franchise so far, Summit is already working to adapt Stephenie Meyer’s fourth and final book in the series, “Breaking Dawn,” into a movie. Currently, the studio is deciding whether or not it’s best to split the 754-page book into two pictures, along the same lines as “Harry Potter and the Deathly Hallows.”

According to Variety, a two-parter is the path Summit is pursuing for “Breaking Dawn,” with hopes that “New Moon” director Chris Weitz will return to helm both pictures. If the two-film route does come to fruition, Summit would have to negotiate new deals with the main cast — Kristen Stewart, Robert Pattinson, and Taylor Lautner — since they are only under contract for four features.

But there’s a bigger issue to worry about here: How will they transfer the complex and graphic storylines in “Breaking Dawn” to the big screen? With even the biggest “Twilight” fans split on whether they love or hate the book, there’s no question that its content will pose a handful of problems for a movie adaptation.

“Breaking Dawn” contains — SPOILER ALERT! — huge sections addressing the complications of vampire/human sex, an unconventional pregnancy, and the gory birth of a half-vampire, half-human baby. On top of that, there’s a chunk in the middle of the book where Jacob takes over narration duty from Bella, leading up to him “imprinting” on the newborn child (translation: The teenaged werewolf falls in love with an infant).

Nowadays, nothing is impossible with a bit of movie-making magic. From a sparkly vampire to a boy who transforms into a wolf the size of a horse, computer-generated effects can work wonders. But just because it can be done doesn’t mean it will live up to expectations. Stephenie Meyer has even expressed her worries on her official site: “The one thing that I’ve never seen is a CGI human being who truly looks real. An actress can’t play Renesmee [the half-vampire baby], at least not when she’s a few days old… She would have to be a construct, and CGI isn’t quite there yet.”

Special effects aside, the mature and explicit nature of “Breaking Dawn” will be a challenge for the studio to keep at a PG-13 rating. They’d have to leave out a lot of the material or figure out a way to tone it down. But in doing so, they run the risk of upsetting fans. On the flip side, if the film version requires an R rating, parents may be wary of sending their teen girls to the movies. Tough call.

What do you think? Can “Breaking Dawn” be successfully transferred to the silver screen? Will it be able to stay true to the text?

I fear the challenge is too big. The two last books are SO amazing… I don´t think you can transfer it all to the big screen in the right way.. What do YOU think?? Kommentera! 😉

One Reply to “The next Twilight Movie”